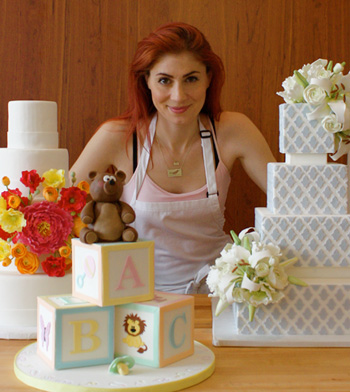 The granddaughter of a professional recipe tester (and notorious sweet-tooth) and the daughter of an artist, cake is just in Lindsey’s DNA. As early as she can remember, Lindsey was drawing and painting with her mother and spending countless hours in the kitchen baking with her grandmother.

After finishing college in Colorado she decided to travel through Europe and see more of the world. It was when she moved to the South of France that she realized she could combine her love of cooking and baking with her innate artistic abilities. As her passion grew, so did her desire for more formal training. She moved to Paris and enrolled in Le Cordon Bleu where she graduated in both the culinary and pastry programs, earning their most advanced degree, Le Grand Diplome.

Lindsey has traveled the world to discover new and exciting flavors and techniques. Working in places like France, Germany, Las Vegas, and New York, Lindsey honed her culinary skills. She has worked for such esteemed chefs as Wolfgang Puck in Las Vegas and restaurants such as Craft and Gotham Bar and Grill in New York.

However, she continued to have a love affair with the arts. After discovering an article on wedding cakes inspired by couples’ china patterns, specialty cakes seemed to be a natural link between the two worlds. She found that her previous experience with drawing, painting and sculpting blended naturally into sculpting cakes and painting sugar flowers.

While advancing her skills in baking, Lindsey began to teach herself all the subtleties of cake decorating. After moving to New York, Lindsey completed courses with decorators like Colette Peters and Toba Garrett and continued to study art at the New York Academy of Art. She decided to specialize solely in cakes and began working as the production manager and lead decorator for both Cheryl Kleinman Cakes and Bijoux Doux Specialty Cakes.

Lindsey finally decided it was time for her next big adventure and created Elegantly Iced. Fusing her long career as a pastry chef with her knowledge of the arts, Lindsey creates unique masterpieces in sugar. With Elegantly Iced Lindsey continues to design and create cakes of amazing beauty and works to push the limits of design, style and whimsy.